What Are The Top 3 Tablet Computers of 2015 For Business and Why?

Looking for new tablets for your business? Tablets are rapidly replacing laptops as the go to mobile device, and many companies are now deploying tablets throughout their workforce to ensure that they can work from anywhere in the world, whether it be a client site or on the road. But with the many dozens of new tablets released every year, it can be difficult to determine which tablet is the best tablet for your needs. In general, it’s going to come down to three major companies: Microsoft, Google and Apple. 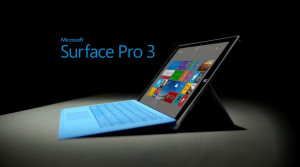 Microsoft’s Surface Pro 3 makes integration with Office 365 a breeze, boosting productivity and improving collaboration. Any business running on Microsoft’s productivity solutions will see the advantage to using this PC-replacing tablet, which inhabits the space between a tablet and a laptop. The Surface Pro 3 can be quickly docked to create a laptop environment, and then easily taken with you for portability. It’s thin, light, has a 12 inch display, kickstand and included digital pen.

gives access to the Google app store. Nexus 9 is compact, with an 8.9 inch screen, high-definition display and up to 32 GB of storage space. As far as price, it’s comparable to the Apple iPad Air 3 and much more affordable than the Surface Pro 3, both weighing in at less than $600.

Sleek and light, the Apple iPad Air 2 is the high-tech option, with a Touch ID fingerprint sensor, high quality cameras and up to 128 GB of storage space. The Apple iPad is what many people imagine when they think of a “tablet”; a thin and attractive device that can be carried and used anywhere. For offices that are primarily Apple-based, the Apple iPad will easily sync and connect with other machines, vastly improving productivity. Offices that are Windows-based may see fewer of these advantages.

Which tablet is right for your business? As you may have realized, it depends a lot on the applications and solutions that you want to use. Microsoft’s Surface Pro 3 creates a high-productivity Windows environment, while Google’s Nexus and Apple’s iPad are both tethered to their respective app stores. The Surface Pro 3 is better for Windows environments, while the iPad is better for Mac OS environments. Regardless, the newest generation of tablets are incredibly powerful and can be used to replace many laptops, for increased portability and ease-of-use.

← We Do iPad Mini 3 Repairs at Go Gadgets
Will Tablets Replace the Desktop Computer? →