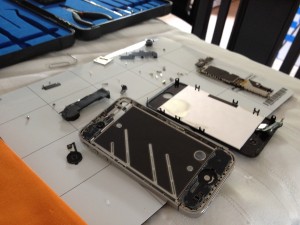 Go Gadgets is the number one place for cell phone repair Las Vegas, NV, and we can help!

If you’re looking for ways to make money in a down economy, here’s an idea: There are lots of people selling or even giving away their old and broken smartphones on sites such as craigslist and backpage.com. Often these phones need nothing more than a new digitizer, or a charging port replacement. Simple fixes such as these are oftentimes all that is needed to restore the phone to practically brand new.

Whatever broken smartphones that you can come up with (and hopefully you’ve spent as little as possible in the process), you can then bring them into Go Gadgets, located at 5905 S Eastern Ave, Ste 107, 89119 at McCarran Marketplace. We’ll fix them at the guaranteed lowest price in town, and then you’ll have a perfectly working phone. You can then either keep the phone, give it to somebody as a gift, or sell it on eBay, which tends to pay higher prices than your local craigslist site, though this is not a hard and fast rule. Occasionally it might be that you are finding more buyers with more money on Craigslist. But generally I have noticed that eBay buyers tend to be willing to pay higher prices.

With enough dedication and smart thinking, you could find yourself with a size side-income that wasn’t there before. If you would like to repair your smartphones for resale at the lowest prices in Las Vegas, please come down to Go Gadgets, located at 5905 S Eastern Ave, Ste 107, 89119. Alternatively, feel free to call us at 702-202-9506, and one of our knowledgeable associates will gladly assist you.